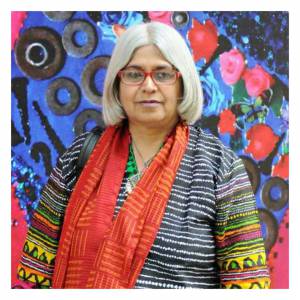 New Delhi based Visual Artist Kanchan Chander is one of the most well recognised artists in Indian Contemporary Art. Kanchansart, born in 1957 in New Delhi; received her formal education degrees in Painting and Printmaking from colleges like the Kunsthochschule Berlin Weißensee in Berlin; the College of Art in Delhi; EcoleDesBeauxArts in Paris and the ArtSchool at Santiago in Chile. She received a grant from the British Council to study Contemporary Art trends, and a scholarship from the French government to study printmaking at Ecole Des Beaux Arts. Her work reflects a worldly take on inspiration, interpretation and technique while a big part of her oeuvre remains female-centric and Indian. She has organised multiple exhibitions in Art Centrix Space , New Delhi, Galerie Gondwana, Berlin and Miyasaka Gallery, Tokyo, among others, and has been awarded numerous times over her illustrious career.

Kanchan Chander’s work is a layered perspective of sustainability through the lens of eco-feminism which could be considered a sub-genre of eco-art. Feminists have claimed their bodies and identities through generations in order to represent the issues which go beyond the general perception and intersect at a point of gendered interlapping. Kanchan Chander uses her feminist sensibilities which arise from a personal space of thought as she introduces her piece, ‘Torso and Tree’. The female torso has been her interest for the past 3 decades or so. She juxtaposed this very torso, which seems to be her own, against a foliage of trees which were a part of her daily routine during her morning walks in the park. This ‘self’ which walks in the park and is free to express her relationship with nature is what comes through in ‘Torso and Tree’. Chander believes that the female torso holds a lot of power and beauty for what it represents universally and thus it has become an element of close introspection for her. On the other hand, in her etched print ‘Adiparashakti’, the trees are open to interpretation by the viewer, either as something tranquil, serene or even a void. These several representations of nature in contrast to her association with the female torso could open up several conversations about how even the concept of sustainability is inevitably connected to gender and sexuality.